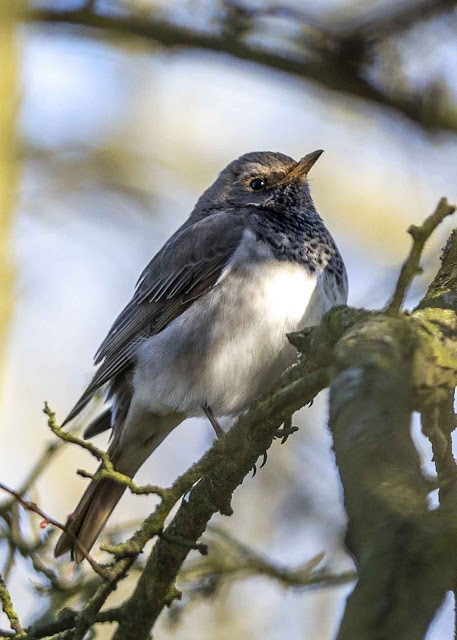 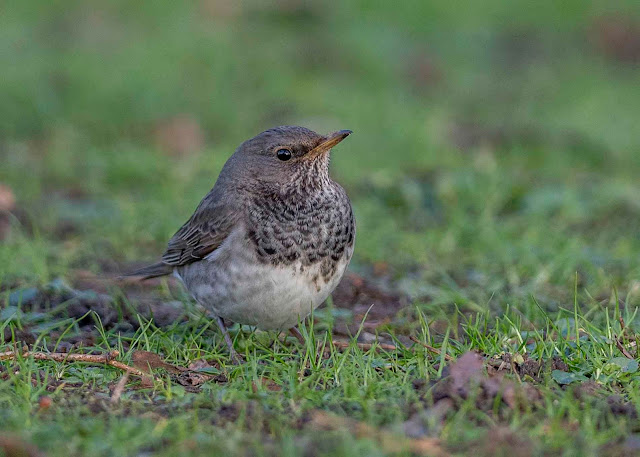 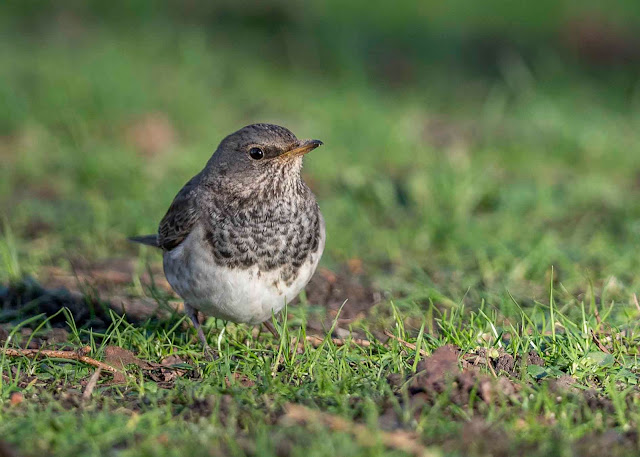 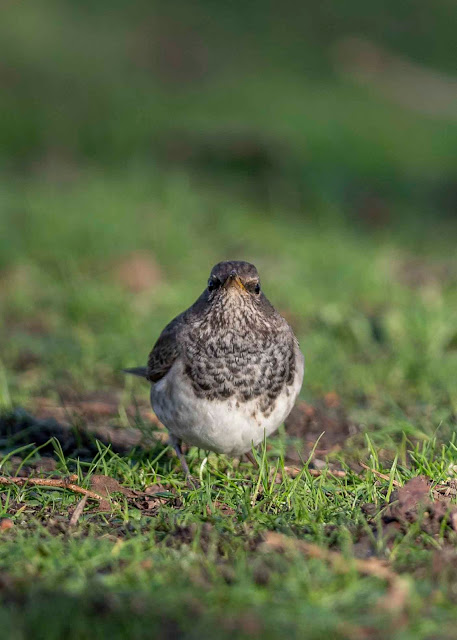 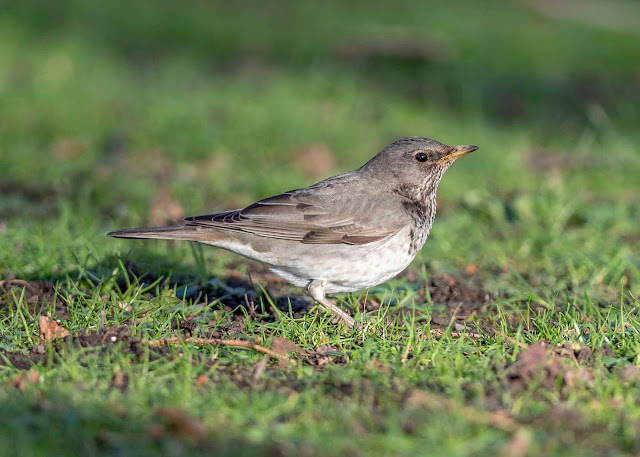 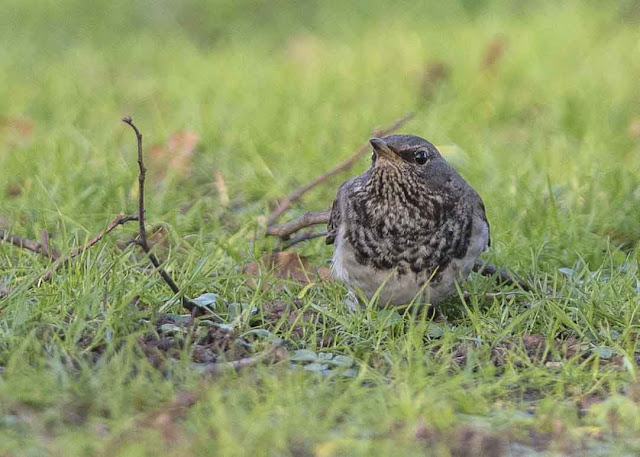 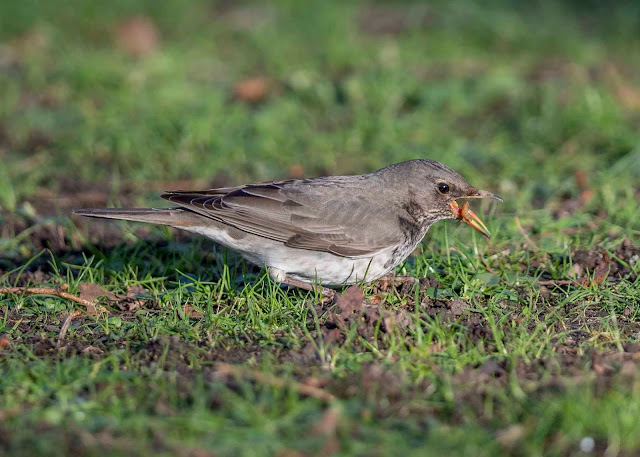 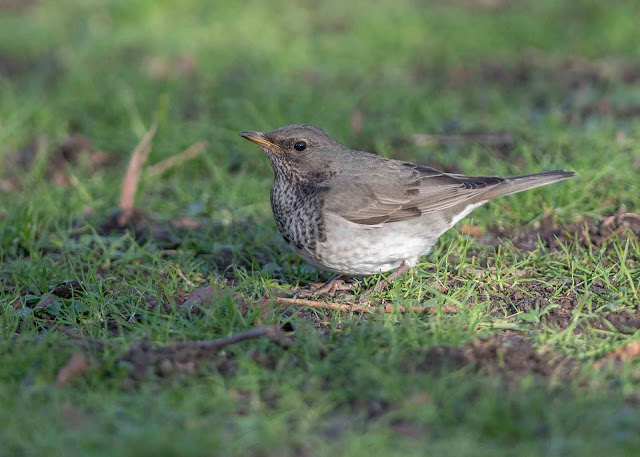 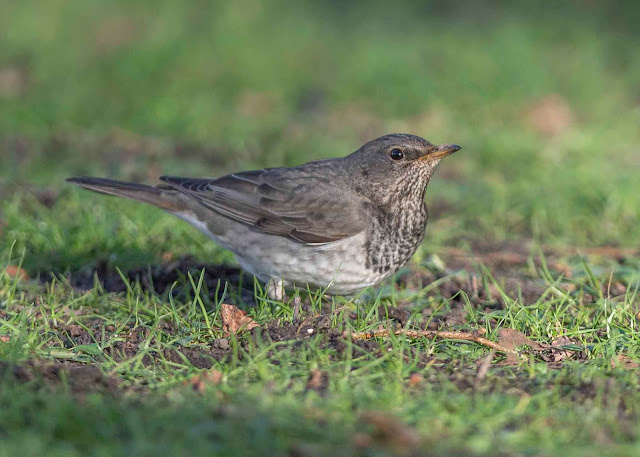 Posted by Andy Mason at 1:43 PM No comments:

Travelled over to Anglesey for a few days birding last week. The primary aim was to capture a few flight shots of Chough around South Stack. This proved to be a frustrating experience as the weather was ropey when the Choughs were flying. When the weather was fine the Choughs were nowhere in sight! I needed to overexpose by around a full-stop to get some definition on the black birds (both Chough and Raven) against white to grey skies. Doing this increased the ISO to an unacceptable level and by the time the photos were cropped to a suitable size the images were so degraded as to be almost useless.
Travelled  over to Red Wharf Bay for a lunchtime pint in the Ship Inn and was pleasantly surprised to find a Snow Bunting feeding along the harbour wall next to the car-park. No such exposure worries with this bird. 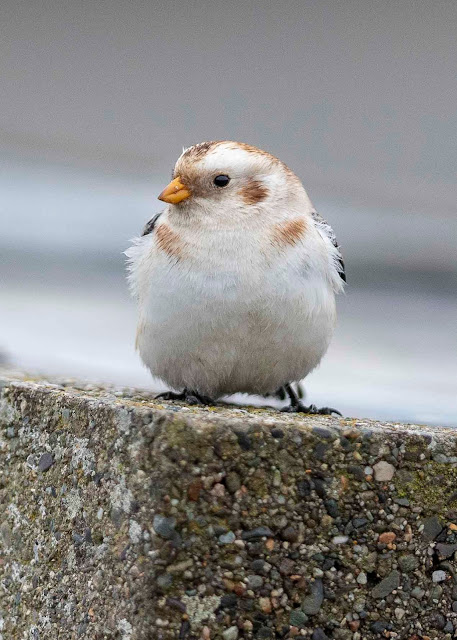 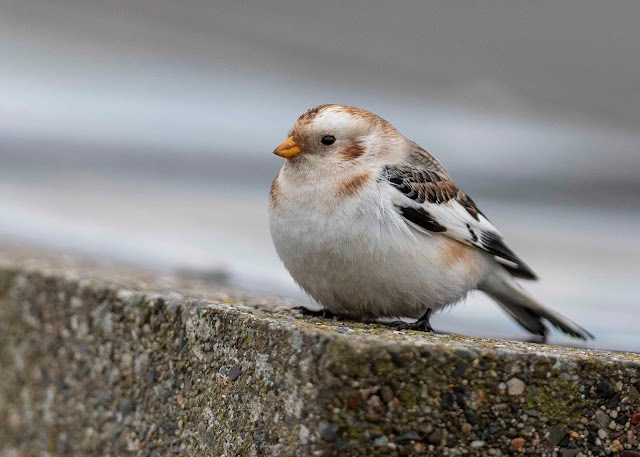 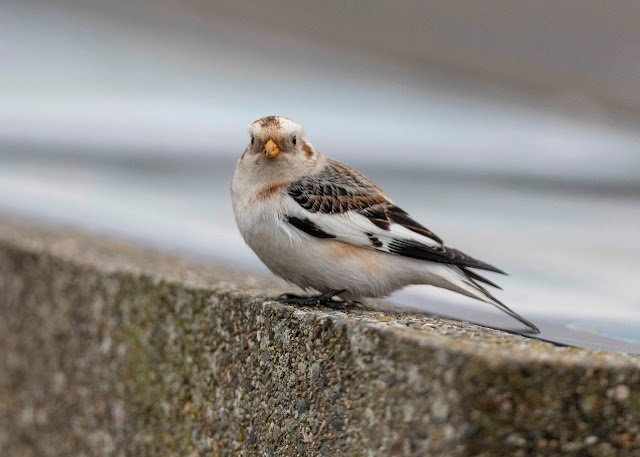 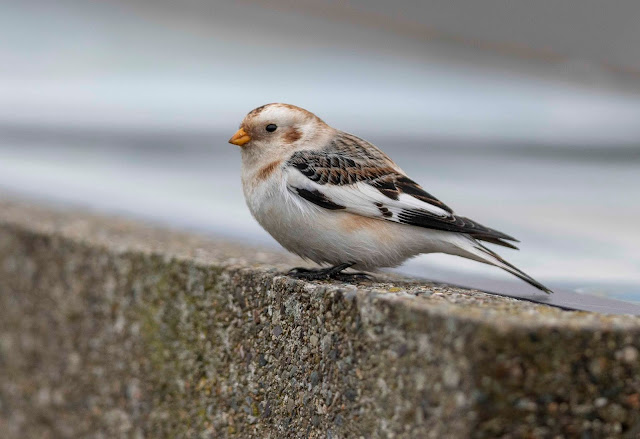 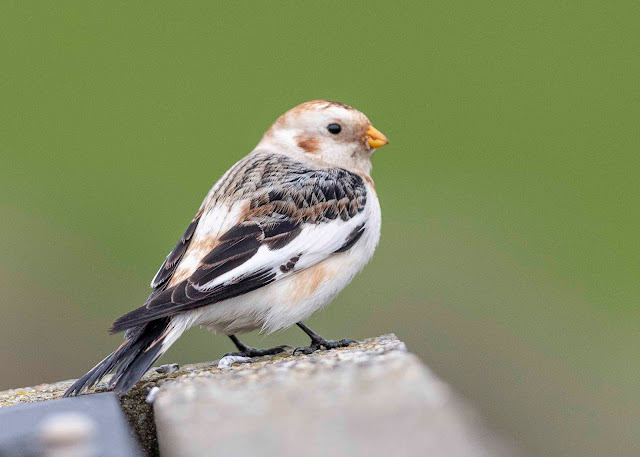 Posted by Andy Mason at 2:15 PM No comments:

With the winds dropping and the rain ceasing today I took a brief stroll around Bridlington Harbour to have a look at the gulls in the hope that there might be something other than the regular Herring and Black-headed Gulls. Apart from a single Great Black-backed there weren't! Still it was worth looking at the Herring Gulls to brush up on ageing criteria. It was possible to place birds into at least three different age groups. One adult bird had a clean white head unusually for this time of year and one first-winter bird had quite a pronounced hook to its beak.

There are always a few Turnstone Arenaria interpres running around on the harbour walls looking for scraps of food and they provide good opportunities for close-up photography. One bird had only one foot but it did not appear to be disadvantaged in any way as it set about tackling the local fishermen's dropped bait.


The surprise bird was a single Purple Sandpiper Calidris maritima searching for scraps along the harbour walls and on the pathways around the feet of people walking by. I always expect to see these birds on rocks and jetties that are exposed to waves, wind and foam not running about outside a fish and chip shop! 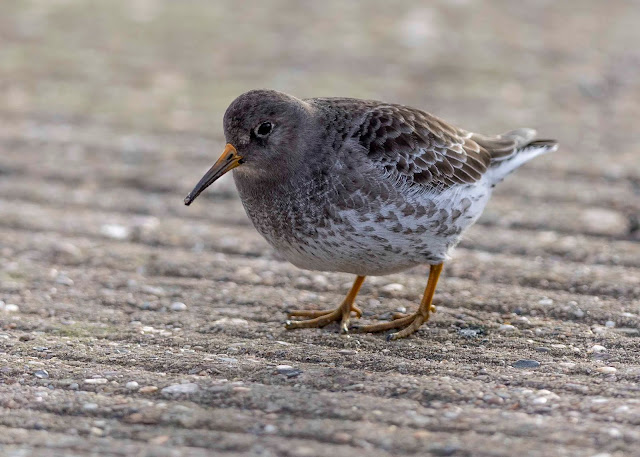 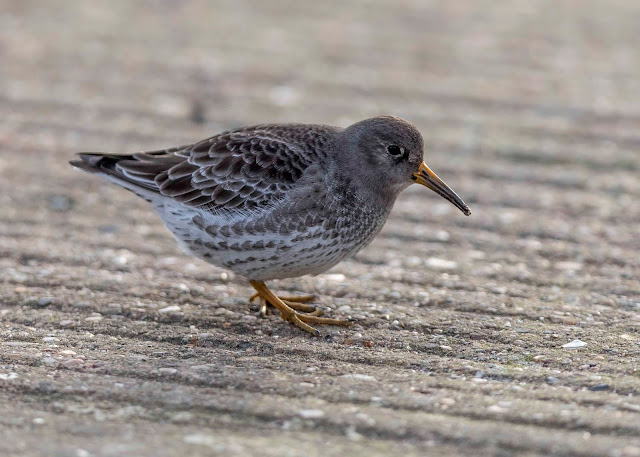 Well I woke up this morning...da,da,de,dah. Well I woke up this morning...and there were eighteen Grey Partridges walking along the lane towards the garden. All eighteen then came into the garden, took a look around and then set back off walking along the lane before they were spooked off by horse-riders. Greys are becoming scarcer each year so this group was not only unexpected but also, perhaps, a positive sign. Pheasants are regular in the garden feeding on fallen seed from the feeders and Red-legged Partridge is common in the surrounding fields but this was by far the biggest covey I have seen in East Yorkshire. 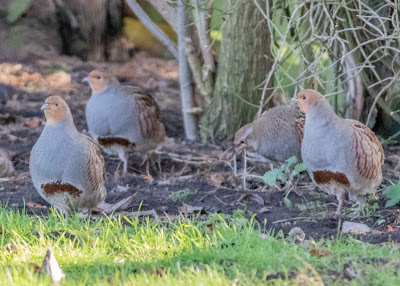 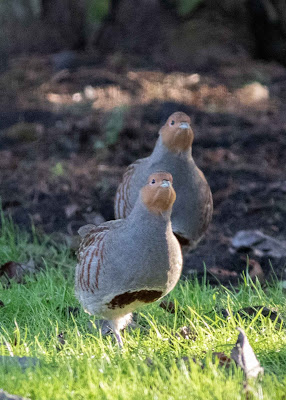 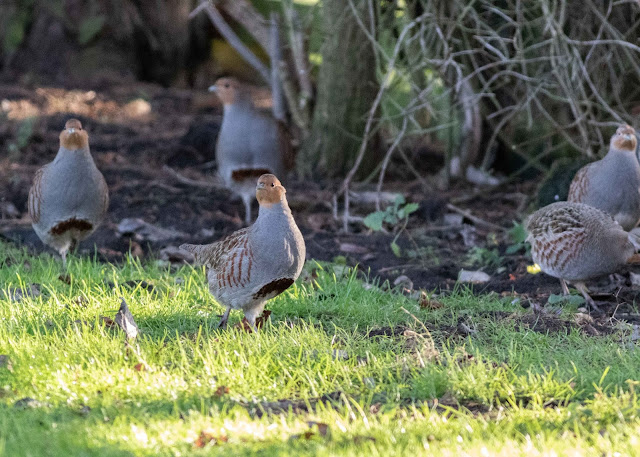 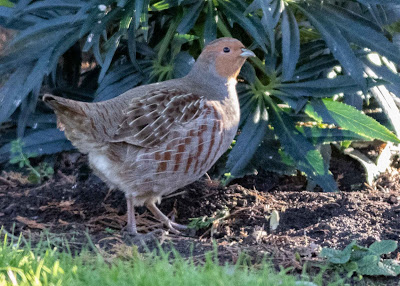 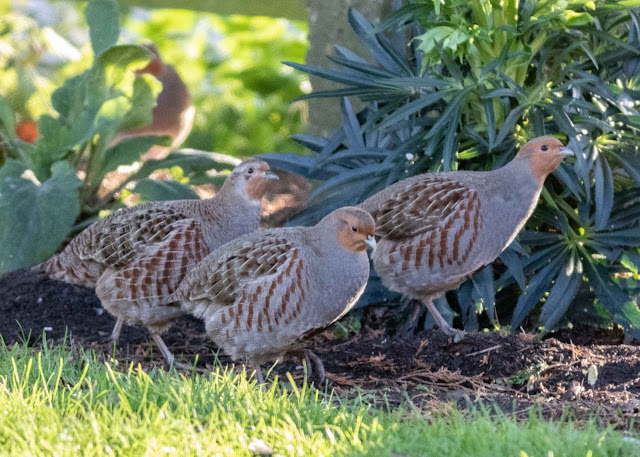 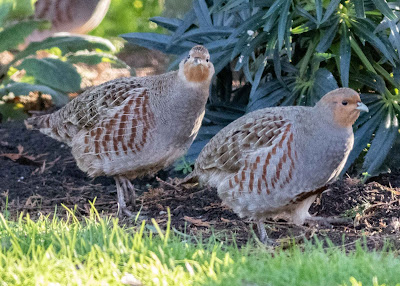 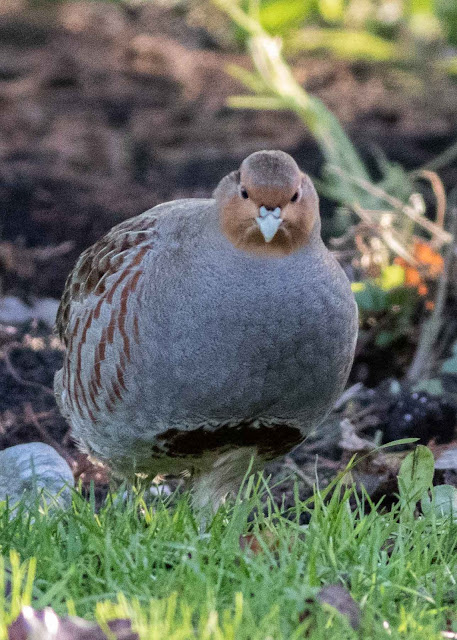 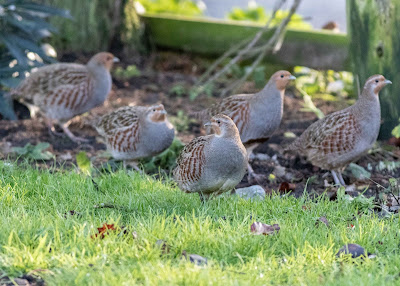 Posted by Andy Mason at 2:19 PM No comments:

Having planned a quick walk around Scarborough Mere to look for photo opportunities of wintering wildfowl I thought I might as well have a go at seeing the Waxwings reported from just north of Scarborough town centre. Typical wintering Waxwing habitat: busy built-up area, lots of traffic, private houses and, of course, a primary school. Always the same when you are wandering about with binoculars and a camera sporting a telephoto lens! There were plenty of suitable feeding sites along the road but we soon located the flock feeding on the berries on a small Rowan in a private front garden next to the public pathway.
We counted 19 birds but previously there had been up to 35 birds present. Presumably they had split into two feeding flocks and were exploiting two different sources of food.
The weather was miserable: drizzle turning to spitting rain, overcast and lead-grey, altogether pretty poor for decent photographs. Still I managed a few decent-ish photographs. 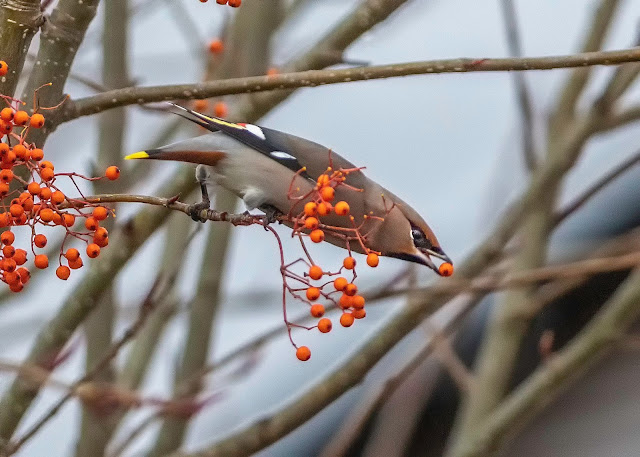 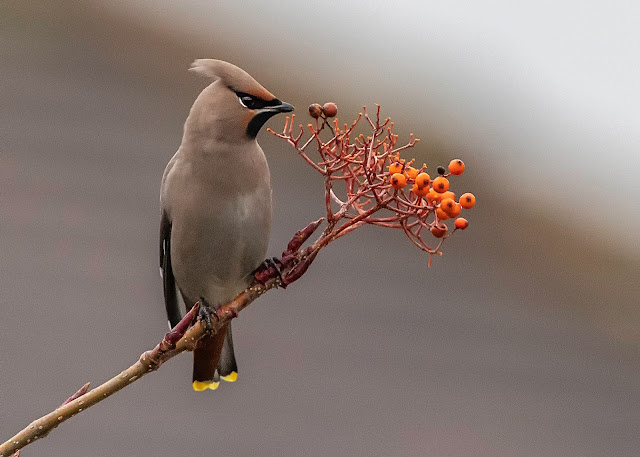 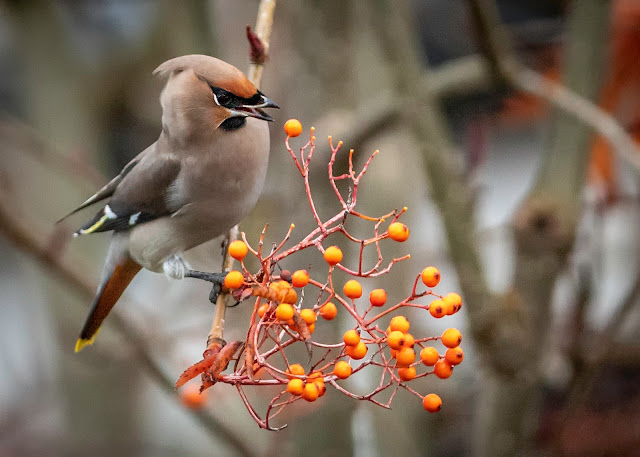 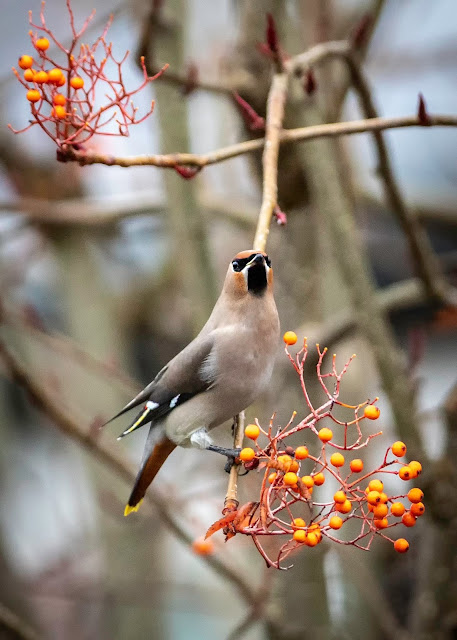 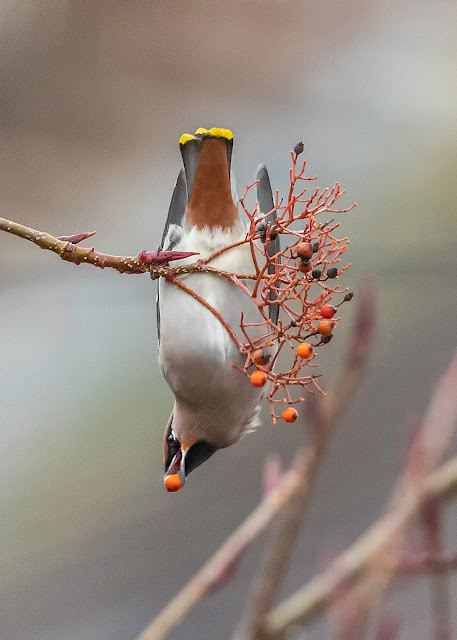 Having recently moved to the bird-rich east coast of Yorkshire I see lots more Oystercatchers than I was used to seeing in south-east Notts. There were always Oystercatchers knocking about the gravel pits and the Trent basin but I generally gave them little regard. The other week I remembered from somewhere in the past that the white band across the throat and the neck-sides was indicative of winter adults as well as first year birds. I had not previously given this much thought but then I checked through recent photographs just to make sure that I was correct. Sure enough it is possible and easy to tell first year birds from adults and breeding adults from winter adults on obvious plumage/bare-part differences. Telling males from females however is more tricky: females have slightly longer and thinner bills than males but experienced observers can usually sex adults on this feature.
So what do we have then in the way of obvious plumage differences. Juveniles have brownish-black upperparts and wing coverts and they have dull pointed bills and dull greyish legs, brownish-red iris with on orangey orbital ring and no throat-band. They develop the white throat-band later in their first year as they enter first winter plumage. Adult winter/non-breeding birds also have the white throat-band but they lose the brownish colouration, becoming dull black, the bill is orange the legs are pink and the iris and eye-ring are red. Breeding adults lose the throat-band; the head, neck, breast and upperparts become glossy black. The rest of the plumage is white and there is a striking white wing bar across the upper-wing.

This blog is inspired by the cover of the 1961 Brooke Bond Tea Card album 'Tropical Birds'. Heady days!